Egg and sperm contribute equally to the successful development of the embryo. Nuclear vacuoles in the sperm head are associated with reduced natural fertility in men. Questions arise about what causes the nuclear vacuolization.

Do we, as biologists, even promote the development of vacuoles in the laboratory without knowing? 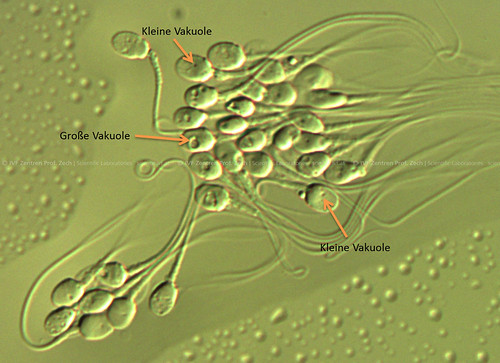 What are nuclear vacuoles?

The corresponding literature believes that the perforated crater-like structures and cavities (or whatever one may choose to call this phenomenon in the sperm head) are assumedly the so-called nuclear vacuoles. These are vesicles of unknown content within the cytoplasm of the sperm head. 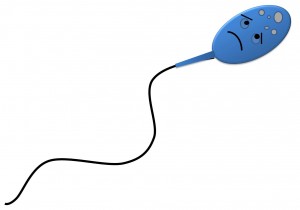 In the early 1990s already, analyses by electron microscopy revealed a correlation between the presence of vacuoles and the reduction of natural male fertility.

Track down the vacuoles….

In 2001 Prof. Benjamin Bartoov introduced the „Motile-Sperm Organelle-Morphology Examination“ (MSOME). Since then we have been able to analyze spermatozoa in real time up to 12.000-fold magnification in the context of fertility treatment. Using a combination of MSOME technique and ICSI procedure (Intracytoplasmic Sperm Injection) is referred to as IMSI (Intracytoplasmic Morphologically Selected Sperm Injection).

Since then, numerous publications have demonstrated the clear advantages of the IMSI over the ICSI procedure: There has been evidence of improved fertilization rates, a larger number of (top-) blastocysts on day 5 of in vitro culture, increased pregnancy rates as well as reduced miscarriage rates after embryo transfer.

…and nail them down!

More and more couples who wish to have children favor the IMSI procedure, since this innovative method permits to detect nuclear vacuoles in the sperm head, thus offering the possibility to select only “intact” sperm for fertilization. Consequently, the oocyte is not the only contributing factor and therefore cannot solely be held responsible for the successful embryonic development during IVF treatment!

At the IVF Centers Prof. Zech we asked ourselves as to whether semen processing in the laboratory was likely to promote the development of nuclear vacuoles, without our knowing it. In order to further investigate this question, we exposed the spermatozoa to different stressful situations. We, of course, had previously sought consent from the men concerned. After having obtained their permission, we started to perform stress testing: sperm were exposed to the attack of reactive oxygen species. We made them swirl in the centrifuge for an extremely long time and exposed them to a temperature of 37°C which is unusually high for spermatozoa. Within the next 24 hours, we recorded the behavior of nuclear vacuoles inside the sperm heads by means of Time Lapse Visualization.

In the best hands

Fortunately, the analysis of the recorded images did not give evidence of any effects on size and characteristics of the vacuoles. These findings corroborate the assumption that vacuolization already occurs during sperm formation in the testicles.

You therefore do not need to worry: In our laboratory your spermatozoa are in the best hands with us – and the way is paved for the child you have dreamed of!

→ more articles concerning this topic in the Special »What men should know about fertility, sperm quality and IVF«
← Home
→ Contact