During the stimulation cycle, the ovarian follicles do not grow at the same pace, resulting in the presence of follicles of various sizes. This growth determines the optimal timing, for both the induction of final oocyte maturation (“Triggering Ovulation”) and subsequently the collection of the ova. The right timing is finally decisive for the success of the treatment. If the duration of ovarian stimulation is either too short or too long, this may reduce the number of follicles containing so-called competent oocytes. By this we mean the ability of an oocyte to mature, become fertilized and develop into an embryo capable of reaching the blastocyst stage and implant itself into the uterus. Numerous factors can play a role here. Do they also include follicular size?

To answer this question, we have conducted a scientific study (published in Ultrasound in Obstetrics and Gynecology, which is a leading international peer- reviewed journal in the field). The study objective was to maximize the number of mature and competent oocytes. 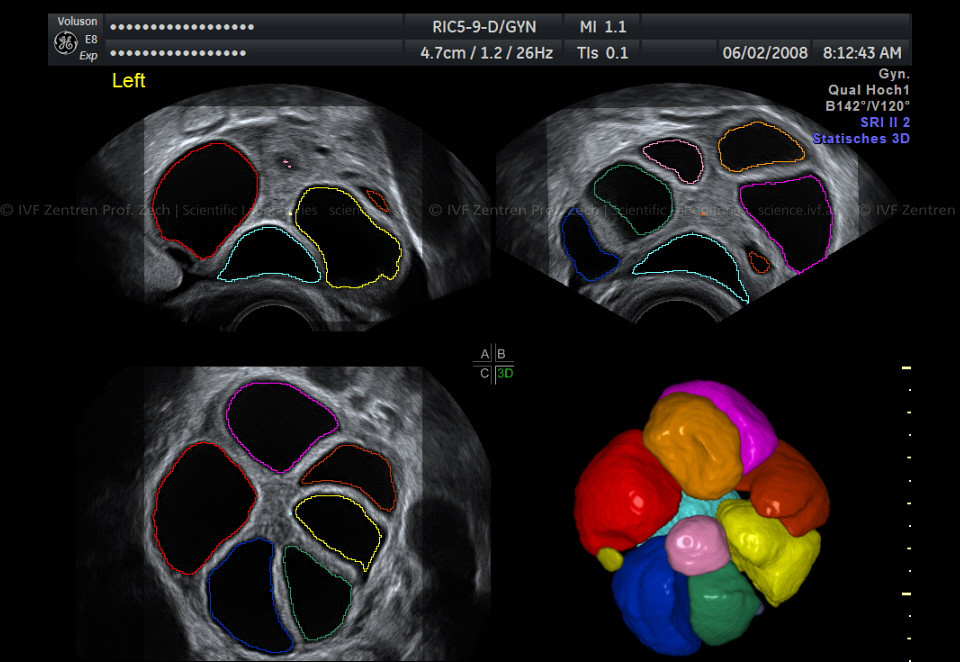 What was the subject matter of our investigation?

Using three dimensional ultrasound imaging, we measured the volume of more than 1200 follicles on the day of follicular aspiration. We then tried to establish any possible links between our results and the likelihood of being able to retrieve any oocytes, the fertilization rate as well as the blastocyst rate. In addition, we carried out a biochemical examination with respect to specific markers and analyzed both the implantation rate and the birth rate.

What kind of result have we achieved?

It has been demonstrated that it is far less likely to remove a mature oocyte from follicles of a volume of <1ml. However, when comparing the further development of oocytes (MII) removed from small follicles with the development of those from larger follicles, their potential for development (blastocyst rate) is quite comparable. The same is also true for the implantation chances and the live birth rates.

In connection with these findings, we have also investigated the follicular fluid with respect to biochemical factors which are considered to be “potential quality markers”. With the exception of estradiol (E2), no difference could be observed between small and large follicles or between follicles containing an oocyte and developing into a blastocyst and those embryos which have stopped their development.

In summary, we would recommend giving the “trigger shot” when most of the follicles have reached a mean size, i.e. a volume of 2-6ml. It should furthermore be ensured that the cohort of follicles of a volume of <1ml, too, will be aspirated, in order to increase the number of oocytes and blastocysts available per stimulation. Ultimately, this will enhance the chances of realizing the dream of having a child.