Having kids despite non-vital sperm

No man wants to hear it – yet it is possible that the involuntary childlessness is due to male-related fertility issues resp. poor semen quality. Luckily, there are now techniques permitting to conceive children in spite of male factor subfertility. 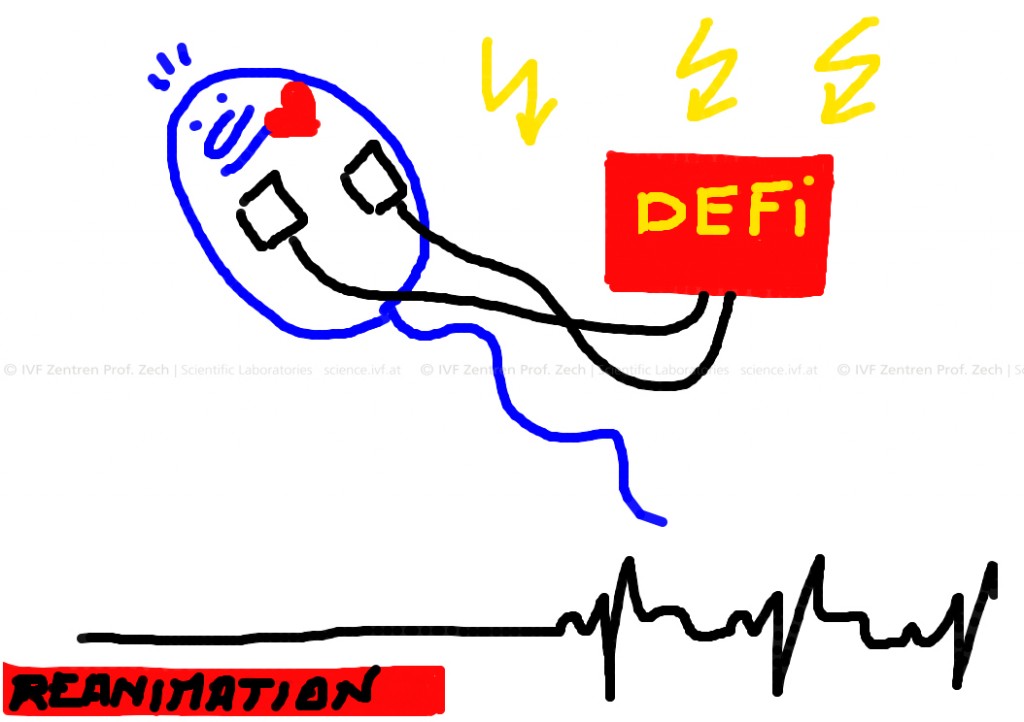 The spermatozoon usually provides for the “activation” of the female egg. This activation results in a signaling cascade within the egg cell. During the fusion of egg and sperm, a factor present in the sperm head is responsible for the changes in intracellular calcium concentration within the egg, which in turn triggers a series of further reactions.
Meanwhile, it is also possible to artificially activate egg cells by means of so-called calcium ionophores. However, the exact processes involved are highly complex triggering signaling pathways that are still largely unexplored.

Using the IMSI-procedure (Intracytoplasmic Morphologically Selected Sperm Injection), significantly increased fertilization rates and blastocyst rates could have been achieved in recent years. However, in about one to three percent of all IVF cycles, the fertilization rate remains considerably reduced or fertilization does not occur. In most of the cases, this is considered to be due to the fact that the egg has not been activated by the sperm.

Today, the desire to conceive a child can be realized, despite any fertility issues. In cases of male factor infertility, too, modern reproductive medicine offers a variety of promising techniques.
If, for instance, spermatozoa are impaired with regard to their motility, the ICSI-technique (IntraCytoplasmic Sperm Injection) allows a previously selected spermatozoon to be injected directly into the cytoplasm of an egg. In certain cases of severe male subfertility (e.g. azoospermia) it is even possible to retrieve sperm from the testis by means of the TESE, TESA or MESA technique.
In recent years, many IVF procedures have improved significantly. The ICSI method has been optimized with regard to morphological criteria by the IMSI procedure. Conventional ICSI has, to a large extent, been replaced by the IMSI procedure at leading IVF centers.

Sperm motility is one of the most important criteria in order to qualify as live sperm. But even an immotile spermatozoon can be vital, and thus be viable and functional. However, it is repeatedly reported that lower fertilization rates are achieved when using immotile sperm. This is mainly due to the uncertainty whether the immotile sperm selected for ICSI / IMSI is actually vital.
There are two possibilities to test sperm vitality:
• HOS (Hypo-osmotic swelling test)
• Mechanical Touch technique

Sometimes it takes a little longer

Adding pentoxifyllin which inhibits the intracellular phosphodiesterases, considerably reduces the degradation of cyclic adenosine 3,5-monophosphate (cAMP). cAMP acts as second-messenger in the cell and leads to an enhancement of sperm motility and an increased metabolic rate.
If, despite the use of those techniques, there is still no indication of sperm vitality, it is very unlikely that fertilization may be achieved.
Although it has proven effective to improve sperm quality by increasing ejaculation frequency or by antioxidant supplementation, the possibilities are, of course, limited when it comes to non-vital sperm.

A baby against all odds

There are always cases with a happy ending against all odds – as has happened in our
IVF Centers Prof. Zech. In 2008, a couple whose chances of success were rather limited, underwent fertility treatment at one of our IVF centers: Due to a tumor disease, the male partner could only make use of previously frozen testicular tissue (retrieved and cryopreserved at another center) as “fertility reserve”. Unfortunately, quality as well as quantity of the cryopreserved testicular sperm was rather poor. Neither the performance of a HOS-test nor the mechanical touch technique resp. the addition of Pentoxifyllin or prolonged culture revealed any signs of sperm vitality or motility after thawing.
It was then discussed to activate the egg cell in order to encourage fertilization. That was the only chance for him to conceive a child with his own sperm. The fertility treatment involving egg activation has been successful – the female partner delivered a healthy baby girl in 2009!
If you are interested in learning more about this particular event – which is unique considering the severity of the case and the enormous challenges – please click here.

Fertility treatment may have reached a new dimension through this cutting-edge technology that enables us to help other couples faced with extremely severe male factor subfertility. To what extent lifestyle factors may have an impact on sperm quality and how you can contribute resp. what you should try to avoid – more details can be found in one of our following blog entries.

→ more articles concerning this topic in the Special »What men should know about fertility, sperm quality and IVF«
← Home
→ Contact