When the immune system is “up to no good” 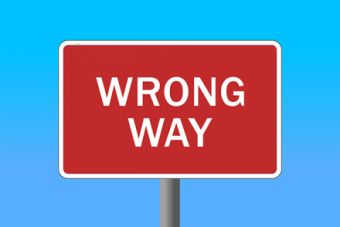 …then these patients suffer from so-called autoimmune diseases, such as Hashimoto’s thyroiditis. The disorder leads to a chronic inflammation of the thyroid, thus impairing the reproductive health of these patients. Patients undergoing treatment at the
IVF Centers Prof. Zech are routinely tested for Hashimoto’s thyroiditis and, if necessary, receive appropriate treatment.

The disorder was named after the Japanese physician Hakaru Hashimoto, who was the first to describe it in 1912. Hashimoto’s thyroiditis is a condition resulting from chronic inflammation of the thyroid gland (chronic lymphocytic thyroiditis). The “misguided” immune system mistakenly produces antibodies that attack healthy thyroid tissue and cause damage to it. The thyroid gland is part of the endocrine system and produces hormones that play an essential role in human metabolism.

The majority of the individuals suffering from Hashimoto’s thyroiditis develop the disorder between 30 and 50 years of age, whereby women are far more often affected than men. The reasons for the onset of the disease have not yet been fully researched. Stress, genetic predisposition, environmental factors or viral diseases are considered as a possible cause for the disorder. Hashimoto’s thyroiditis is currently incurable. However, the symptoms can be effectively treated.

More and more people suffer from this disease of the thyroid gland. Previous investigations have shown that among couples seeking fertility treatment, up to one third of the female partners are affected by the disorder. Those concerned are often unaware that they suffer from a chronic inflammation, which may lead to hormonal disorder. Since the symptoms are extremely diverse, this type of thyroid disease often remains undetected or may even be misdiagnosed and may subject the patients to the wrong treatment. The affected individuals suffer for years. Without it being necessary, they take their antidepressants, or are even dismissed as a hypochondriac.

In the course of the disease, we differentiate between hyperfunction and hypofunction of the thyroid gland. Hashimoto’s thyroiditis often begins with a hypertrophic thyroid gland. This form of the disease often goes unnoticed at first. The gland becomes enlarged and is also referred to as “goiter” or “struma”. Among the symptoms of thyroid hyperfunction are: nervousness, irritability, restlessness, hand trembling, sleeping disorders, palpitations, ravenous appetite, intensified thirst, weight loss despite sufficient food intake, disturbed menstrual cycle, etc.

Both forms can easily merge into one another and they proceed in stages. The atrophic form (hypofunction) is far more common and is the final stage of the disease after having suffered from thyroid hyperfunction for a long time.

The thyroid is butterfly-shaped and is located on the anterior side of the neck, lying against and around the larynx and windpipe. The following hormones are produced by this important gland: tetraiodothyronine T4 and T3 (four and three iodine atoms). In addition, the thyroid is connected to the pituitary gland which produces the thyroid-stimulating hormone TSH. This hormone increases the secretion of T4 and T3 which, in turn, have an impact on human organs, such as heart, muscles, bones, skin- and nerve cells. 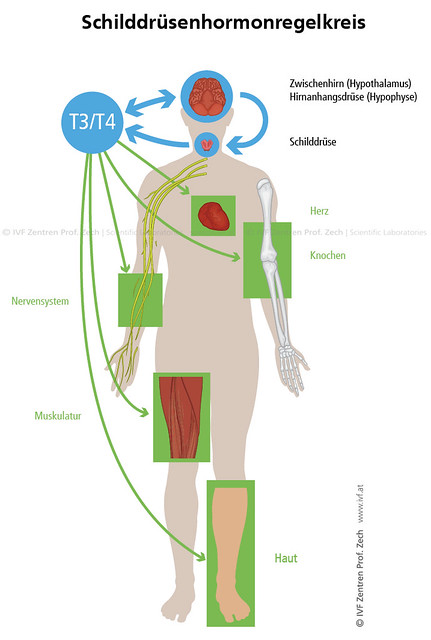 In order to rule out the presence of Hashimoto’s thyroiditis, the following hormone and antibody tests should be performed: TSH, T3 and T4 as well as the level of thyroid autoantibodies TPO (antibodies against thyroperoxidase, also referred to as TPO) and antibodies to thyroglobulin (TG). Increased levels of these antibodies indicate the presence of an autoimmune disease. The level of the parameter itself plays a lesser role, as it does not involve any changes in symptoms.

The symptoms of the autoimmune disease have a relapsing course. Hence, the relevant hormone levels are constantly subject to fluctuations. Since it is difficult to maintain a constant “normal” value, it is crucial to monitor laboratory findings and administer oral medications throughout the entire life.

A hypofunction of the thyroid requires the administration of “T4-preparations “(parameter to carry out the blood test) (e.g. Euthyrox, L-Thyroxin). Depending on the hormone levels, symptoms and the progress of the disease, the treating specialist will determine the respective dosage. In the course of time, the symptoms of hypothyroidism will increase, thus requiring the corresponding hormone intake to be constantly adjusted. Hyperthyroidism does usually not require medical treatment. Depending on the complaints and the course and duration of the disorder, it is however possible to administer thyroid inhibiting drugs. The affected individuals should be careful not to consume iodine-containing products or medication (table salt, vitamins, etc.), since iodine may worsen the inflammation, thus promoting the frequency of attacks. Additional selenium supplementation has been found to have a beneficial effect on thyroid functions.

Disturbed hormone production has a negative impact on fertility. The effective management of Hashimoto’s thyroiditis usually involves the daily intake of thyroid hormones (see management).
The IVF Centers Prof. Zech are supporting the fertility treatment of affected patients by the supplementation of micronutrients (“Fertilovit”). The preparation “Fertilovit F THY” is free of iodine, but contains selenium, B-vitamins (patients with Hashimoto’s disease have an increased risk for vitamin B deficiency) as well as important antioxidants. Current studies conducted by the
IVF Centers Prof. Zech have revealed that patients with Hashimoto’s thyroiditis taking the supplement “Fertilovit F THY” needed less thyroid medicine during fertility treatment, while achieving pregnancy rates that were more than twice as high. This can, among others, be explained by the influence of the ingredients contained in “Fertilovit F THY”: Blocking TPO antibodies, lowering the homocysteine level, increasing the levels of selenium/zinc and iron in the body, etc.

Thyroid hormone treatment is of the utmost importance during pregnancy, because otherwise the hormonal disorder may affect the development of the unborn child. The treating physician should perform the relevant blood tests in the first, second and third trimester of pregnancy. In this case, it is not possible to completely do without iodine, since this trace element is essential to the child’s development!